Here is a basic summary of all available garbage collectors.

What happened to 8K?
There were probably some objects in the minor generation that got moved to the old generation. Eventually the tenure space is going to less and less space which will trigger a full gc. Here is the stackoverflow answer for this. According to sackoverflow answer, “As for your test case, the String objects will never go in Old Generation. They will at most survive 1 GC cycle and go to a Survivor space, and then will be reclaimed” “There are at least 20 other threads running in the JVM, not only your “Main” Thread, so it is quite logical that some objects are created.”.

clearly, the reduction in full heap is due to clearance of memory in tenure space.

When is the GC called?
The JVM will decide that. You can use System.gc() but its not guaranteed that the GC will be called.

What objects are eligible for GC?
Lets take an example! (I got this from http://stackoverflow.com/questions/3299604/interview-question-objects-eligible-for-garbage-collection). How many objects will be scheduled for GC before //Some other code?

In few words, how does garbage collection occur?
The most straightforward garbage collection algorithms simply iterate over every reachable object. Any objects left over are then considered garbage. The time this approach takes is proportional to the number of live objects, which is prohibitive

Memory divided into generations? What, Why?
Memory is divided into generations. Why? Because typically different objects live for different duration. Full GC’s loop through all live objects that take a long time. The idea is to garbage collect certain sections of live memory more often. Many objects can be reclaimed (i.e., have “died”) shortly after being allocated. Some objects do live longer. Basic premise is divide memory into young and old generation, allocate all memory initially in the young gen. Garbage collection starts from young gen (which takes lesser time and happens more often) and graduate objects to old gen (if they’re yet alive). When you garbage collect in young gen, you potentially loop through lesser objects, and you reclaim most of them. 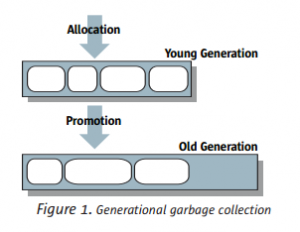 Most objects are initially allocated in Eden (a few large objects may be allocated directly in the old generation). Survivor spaces hold objects that have survived at least one young generation collection and have thus been given additional chances to die. At any given time, one of the survivor spaces (labeled From in the figure) holds such objects, while the other is empty and remains unused until the next collection. 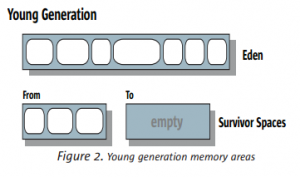 General garbage collection concepts (not tied to JVM)
Mark and sweep is an algorithm used by the JVM to collect garbage. It goes accross the heap and checks which memory references and being referenced and marks them. An object is considered garbage when it can no longer be reached from any pointer in the running program. It goes across again and garbage collects all memory spaces that have not been marked. The time this approach takes is proportional to the number of live objects, which is prohibitive for large applications maintaining lots of live data. The mark-and-sweep algorithm does not address fragmentation (meaning holes in memory).

One way to deal with fragmentationis to shift memory into empty blocks. What happens too all pointers pointing to that memory location which got moved? you would need to update all pointers which is time consuming. Well, alternative is to use redirection (or double pointers). Your pointers will point to a memory space which will contain the address. You need to update just that address.

Stop-and-Copy Garbage Collection is another GC method which uses double the memory but avoids fragmentation. You need to provision two chunks of equal memory. Start by allocating memory in the first chunk. Lets say it gets fragmented. Now copy all the memory from first chunk into second chunk (when you copy all the memory will get de-fragmented) and keep allocating memory in the second chunk. Now assume even that gets fragmented. Repeat! Survivor spaces in young generation use this technique.

How does JVM garbage collector allocate space?
Allocation occurs using a simple technique called bump-the-pointer. The end of the previously allocated object is always kept track of. When a new allocation request needs to be satisfied, all that needs to be done is to check whether the object will fit in the remaining part of the generation and, if so, to update the pointer and initialize the object.

What about multi-threaded garbage collectors? Synchronizing on the pointer will be very time comsuming. Here comes in the use of Thread-Local Allocation Buffers(TLABs). Each thread its own buffer (i.e., a small portion of the generation) from which to allocate. Since only one thread can be allocating into each TLAB, allocation can take place quickly by utilizing the bump-the-pointer technique, without requiring any locking. Only infrequently, when a thread fills up its TLAB and needs to get a new one, must synchronization be utilized. Because there are multiple garbage collector threads there is a small possibility of fragmentation. Reducing the number of garbage collector threads will reduce this fragmentation effect as will increasing the size of the tenured generation.

They are in some sense opposing goals. For example, 1.) a very large young generation may maximize throughput, but does so at the expense of footprint, promptness and pause times. 2.) the parallel garbage collector would help with throughput over response time, as compared to a concurrent garbage collector which would help with response time over throughput. 3.) A small footprint might be the main concern of an application running in a mobile phone.

In anycase you can decide in what range would the heap be sized.
-XX:MinHeapFreeRatio=40
-XX:MaxHeapFreeRatio=70 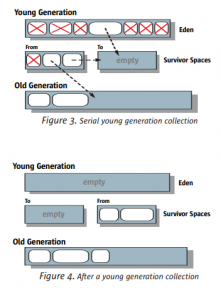 Old GC (or major collection) using serial collector. It consists of a mark & sweep, then a compaction step for de-fragmentation. 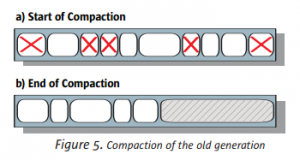 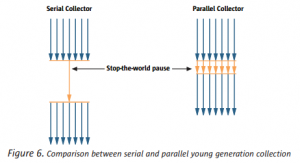 Parallel compaction (or the Parallel Compacting Collector) is a feature introduced in J2SE 5.0. Without parallel compaction major collections are performed using a single thread, which can significantly limit scalability. Parallel compaction is enabled by adding the option -XX:+UseParallelOldGC. On a machine with N processors (-XX:ParallelGCThreads=

How does Parallel Compacting Collector work?
1. Each generation is logically divided into fixed-sized regions.
2. Marking phase, mark all live objects in parallel. Update data for the region where live data resides with the size and location of the object.
3. The Summary phase operates on regions. Due to compactions, it is typical that left side will be dense, containing mostly live objects. There is less scope to recover space from such dense regions. Aim of this phase is to find a point where the space that could be recovered from a region and those to the right of it is worth the cost of compacting those regions. After finding such a point, regions to the left of that point are referred to as the dense prefix, and those regions will be untouched. The regions to the right of that point will be compacted, eliminating all dead space. The summary phase calculates and stores the new location of the first byte of live data for each compacted region. This is a serial phase.
4. Compaction phase, the garbage collection threads use the summary data to identify regions that need to be filled, and the threads can independently copy data into the regions. 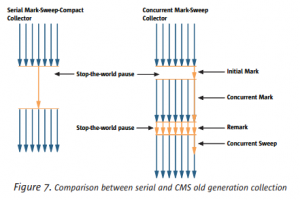 Floating Garbage?
While the remark phase is going on (which is a concurrent activity) there might be some objects that become dead while tracing is going on. They wont be marked alive, and are known as floating garbage. This phenomenon is seen only in the concurrent mark and sweep algorithm.

What is Incremental Mode in CMS?
Incremental Mode could be used if response time is important and you dont have too many processors. Incremental mode solves this problem by breaking up the concurrent phases (that use one processor) into short bursts of activity, which are scheduled to occur mid-way between minor pauses.

What is Ergonomics?
Ergonomics means choosing JVM parameters depending on machine characteristics.

If you specify the Xms and Xmx at different values Generation Size Adjustments occur to adjust the size of the heap. Growing and shrinking the size of a generation is done by increments that are a fixed percentage of the size of the generation so that a generation steps up or down toward its desired size. If not otherwise set on the command line, the initial and maximum heap sizes are calculated based on the amount of memory on the machine.

Q. Where is a static method and a static variable stored in java. In heap or in stack memory
http://stackoverflow.com/questions/8387989/where-is-a-static-method-and-a-static-variable-stored-in-java-in-heap-or-in-sta

What is The Garbage-First Garbage Collector?
The G1 collector is a server-style garbage collector, targeted for multi-processor machines with large memories. It meets garbage collection (GC) pause time goals with high probability, while achieving high throughput.